If you are looking for a transom mount trolling motor with foot control, then you are likely coming up empty-handed. This is because very few are made, and the ones that are can be impossible to find for sale. That doesn’t mean that you are completely out of luck, however. There are a few good solutions, which we will describe in this article.

As you know, the transom is the vertical section at the rear of the boat. Since this is where the captain of the boat typically sits on a smaller boat, it simply makes the most sense to have the trolling motor be hand-operated while mounted in this position.

On the other hand, the bow is the front of the boat. Since the captain may often not be sitting in the bow of a smaller boat, having a motor up here be either foot-controlled or remote-controlled typically makes the most sense.

But if you are a solo fisherman, then you may wish to have both hands free as much as possible, in order to deal with the job of catching fish. This is where having a transom mount trolling motor with foot control can come in handy.

The first transom mount motor on our list is a true foot-controlled transom-mounted trolling motor. The problem is that it is difficult to find for sale. The other motors are ones that we like but will require a conversion, which we will describe below.

If, and that’s a big IF, you can find one for sale, then the MotorGuide Bulldog Foot Controlled Transom Mount Freshwater Trolling Motor would be our top choice for a transom mounted trolling motor with foot control. This trolling motor was designed for exactly what you are searching for, without the need to do any sort of modifications.

If you are able to get your hands, or foot, on this motor, we think you would be pleased with its performance.

The MinnKota Edge Bowmount Foot Control Trolling Motor is a great overall trolling motor, which explains why it is consistently a top seller.

The MinnKota Edge was designed for durability and dependability. It is well known for its indestructible 42″ composite shaft. It also has a composite head that is impact-resistant and made with an anodized aluminum marine-grade spine.

We really like how this trolling motor has five speeds for optimal comfort. You can mount this trolling motor on boats up to a max length of 18′. Given that it does have a foot control, you may want to consider doing a transom mount conversion on it.

Another one of our favorite trolling motors is the Haswing Cayman 48. What we really love about this trolling motor are the many adjustments that you can make to it, along with the fact that it includes a wireless remote control. We realize that some will still prefer a foot-controller, but having a wireless remote allows you to control the motor from anywhere on your boat.

This motor weighs only 55 pounds, so moving it around is quite easy. It also features cruise control, which allows your boat to maintain desired speed while fishing. The super-quiet operation means that it won’t scare away nearby fish.

Top Of The Line

The Minn Kota Ulterra Freshwater Bow-Mount Trolling Motor with Universal Sonar 2 is a beast of a trolling motor setup.

Designed for durably, the Minn Kota Ulterra trolling motor is perhaps the easiest trolling motor to get in the water. This is due to its Auto Stow/Deploy and Power Trim features. With just the push of a button, you can stow or deploy the Ulterra. For surprisingly accurate GPS anchoring, the Ulterra has a Spot-Lock feature which works brilliantly. Other nice features include a battery meter display, an indestructible composite shaft, and a variable speed Digital Maximizer motor feature.

Ulterra motor models come with either i-Pilot or i-Pilot Link, which are Minn Kota’s two wireless GPS systems. With i-Pilot you get fingertip access to steering, speed, spot-lock, and the ability to record and retrace paths on the water.

Some bow-mount trolling motors can be converted to transom-mount. This includes some of the models with foot controls. Before you attempt a bow mount to transom conversion, check out this video to get an idea of how it is done.

The good news is that a transom mount trolling motor with foot control conversion is possible on some motors. This will take some work, and not all motors are capable, so be sure that you are up to the challenge if you decide to go this route.

In our opinion, choosing a wireless remote controlled trolling motor would give you the most flexibility and ease of use.

Lifelong watersports enthusiast and author. I have owned and worked on boats for over 25 years. My love for everything marine related led me to create this site and share my knowledge with like-minded boat and watersports lovers. 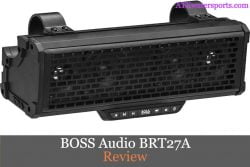 Hi! I’m Charles. My team and I are passionate about watersports & boating and sharing all that we know and learn about marine hobbies. We have decades of combined watersports experience between us. ATXwatersports.com is the ultimate resource for learning everything about watersports, marine, and boating products.

Disclaimer: As an Amazon Associate I earn from qualifying purchases. ATXwatersports.com provides lists of the best watersport, boating, & marine products for people who quickly want to know what to get. When readers choose to buy our independently chosen editorial picks, we earn affiliate commissions that support our work.